Upon my return to the hotel, I noticed that the street was a little busier and louder this night, with many more people out and about.

It was a long day, but totally worth it, and I wasn’t done with it yet. After a quick wash and change, I came back out to sit and take it all in. That’s when I realized there was a full moon rising….ah, a full moon night in Bucharest after a day in Transylvania…I could hear the vampires and werewolves calling….it doesn’t get any better than this. 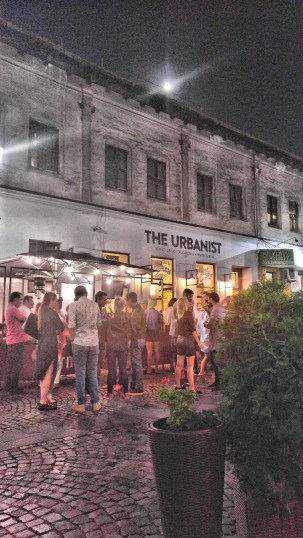 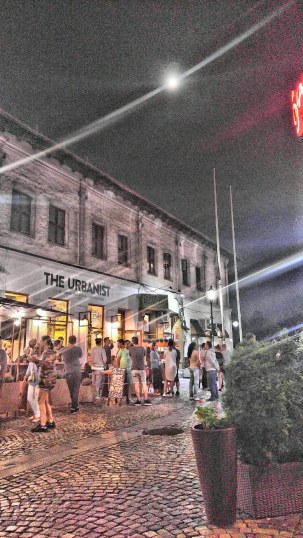 Well, one can’t go to bed at 10:30 pm on a night like this…so I sat outside the hotel for a few minutes and laughed at this: an old woman, in traditional garb, seated alone by herself at one end of the patio, seemingly watching the debauchery going on nearby. Make sure you zoom in….

Then with a little liquid encouragement, I decided to go walkabout a little. I posted the last picture in this group on Facebook with the caption “I love this city”, to which my lovely sister replied “Alcohol and beautiful women–of course you do!”  Yes, that.

I called it a night about 12:43 am, and started back to the hotel. Along the way, a dark-haired, dark-eyed, very friendly young lady grabbed my arm and offered to accompany me back to my room. With the amount of liquid courage I had on board, and my diminished inhibitions, it is a wonder I summoned up the will to turn her down. We did walk arm in arm all the way back to my hotel as she used her feminine charms to try to change my mind, and it was very nice having her lithe little body pressed against me. But those of you that wonder what happened to my watch? Now you know. And you only know if you’ve read this far.
It isn’t mentioned anywhere else. And will never be.

The Original “Pieces of My Mind”

More Pieces of My Mind